Last week’s debate between Vice President Joe Biden and Rep. Paul Ryan got me thinking of another national campaign I covered a dozen years ago that also saw two running mates square off in Danville, Ky. I’m talking about the historic 2000 election that not only ended in the Florida recount but pitted incumbent Vice President Dick Cheney against the first Jewish candidate on a major ticket, Sen. Joe Lieberman of Connecticut. The Democrat-turned-Independent is retiring this year but in the fall of 2000, he was a hot political commodity and I was the reporter USA TODAY assigned to travel on his plane during the fall campaign. 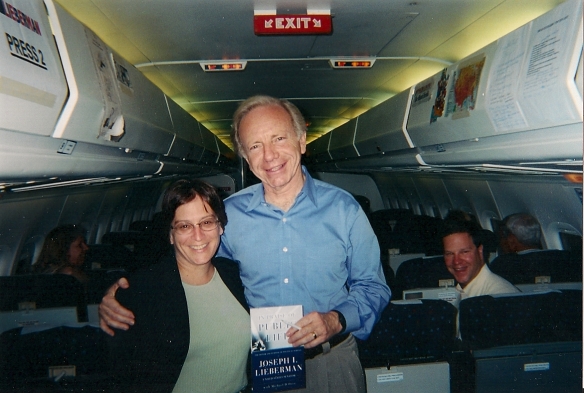 With the candidate on his 2000 vice presidential campaign plane

From Bangor, Maine, to Seattle and every swing state in between, I was with Lieberman 24/6 (the Democratic veep press corps was the only one that got off for the Jewish sabbath). I reported on the highs — watching in the studio as he did his schtick on The Daily Show with Jon Stewart  and Late Night With Conan O’Brien — and the lows — charges “the moral conscience of the Senate” turned partisan and fickle on the campaign trail. And I was at Gore-Lieberman headquarters in Nashville on Election Night, reporting  on the team that covered the fallout that ended more than a month later at the U.S. Supreme Court in the landmark decision Bush v. Gore.

A few years later, I traveled to Manchester, N.H. to cover Lieberman’s lackluster campaign for the top job in the 2004 presidential election and, a few weeks later, wrote about his decision to call it quits and stay on Capitol Hill.

Over the years, I’ve weighed in on Lieberman’s ability to infuriate his once-fellow Democrats, his neoconservatism , the political view of his fellow Orthodox Jews and his chairmanship of the Senate Committee on Homeland Security and Governmental Affairs.

Whatever you think of Joe, after 24 years in the Senate, all I can say is gey gezunterheyt, which is Yiddish for “go in good health.”

As we await the first debate between President Barack Obama and Gov. Mitt Romney, issues of religion and politics resonate in this election just as they have in previous elections. Whether it is Romney’s Mormon faith or the insistence of some that Obama is a secret Muslim, faith matters to many voters.

That was the case in the 2008 cycle, the first time Romney made a run for the White House. I traveled on the Massachusetts governor’s campaign plane in the days leading up to Super Tuesday, meeting up with him in Salt Lake City at the funeral of the prophet of the Mormon Church. The trip was a cross-country sprint that included stops in the Midwest, a Super Bowl watch party in the lobby of a Nashville hotel (the campaign gave out New England Patriots caps to the traveling press but the New York Giants pulled off a stunning win anyway), an airplane hangar rally in Long Beach, Calif., and a red eye back to Boston to await returns on Super Tuesday. As we know. Sen. John McCain was the Republican victor that day and Romneysoon pulled out of the race.

Two months before his first presidential campaign ended, I was in Key West, Fla., at the Pew Forum’s biannual Faith Angle Conference on religion, politics and public life. The invitation-only retreat featured some of the nation’s leading journalists, including E.J. Dionne of The Washington Post, Mike Allen of Politico, syndicated columnist Kathleen Parker and Michael Barone of U.S. News & World Report and Ross Douthat, then of The Atlantic and now a columnist for The New York Times.

At the time, Romney was preparing to make a major speech about his Mormon faith to counter the unease felt then — and now — by many evangelical voters. So it was fitting that one of the sessions at the conference featured political scientist John Green discussing his research on how religion might influence the 2008 presidential election. The points discussed, including a Q&A session with the journalists, is worth revisiting as we enter the final weeks of the 2012 election.

You can read the transcript here. Be sure to read all the way down to the part where I talk about evangelicals and Reform Jews and the meaning of being “pro-Israel.” Republicans and Democrats are still arguing over which party should get that label, as I have written about for The Huffington Post on several occasions.